The destruction of the Temple of Jerusalem in 70 CE, which put an end to sacrificial worship in Israel, is usually assumed to constitute a major caesura in Jewish history. But how important was it? What really changed due to 70? What, in contrast, was already changing before 70 or remained basically – or “virtually” -- unchanged despite it? How do the Diaspora, which was long used to Temple-less Judaism, and early Christianity, which was born around the same time, fit in? This Scholion Library volume presents twenty papers given at an international conference in Jerusalem in which scholars assessed the significance of 70 for their respective fields of specialization, including Jewish liturgy, law, literature, magic, art, institutional history, and early Christianity. 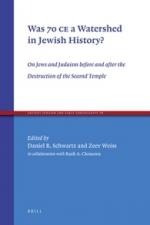