The quest for personal and social identity is an existential and fundamental aspect of human existence. It affects how relationships are formed within national, religious, and ethnic groups. This construct of identity is the focus of the papers collected in this volume organized by ou research group "Question of Identity", which were offered at its 2017 international conference.  Topics explored include: minority groups within the Persian Achaemenid Empire; Jews in Sasanian Babylonia and Palestine; Jewish identity in the Hellenistic world; archaeological tools for the study of identity; and challenges to dichotomous views on religious and national identities in the Early Modern and Modern eras. 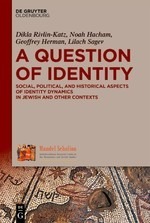