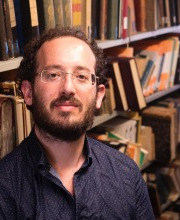 Dr. Jonathan Vardi completed his PhD in the Hebrew Literature Department of the Hebrew University, and was a Minerva postdoctoral fellow at Ludwig-Maximilian University in Munich. His research concerns Hebrew poetry written in medieval Muslim Spain (al-Andalus) and the social circles of its authors and audience. In particular, it is dedicated to the work of the first major poet of the Hebrew-Andalusian school, Samuel Ha-Nagid (Ismāʿīl ibn Naghrila; 993-1056). By returning to the ancient manuscripts of his Dīwān (book of poems), reconstructing the original structure of the Dīwān, and conducting a comparative study of parallel Arabic works, Vardi’s research examines Samuel’s lifelong attempt simultaneously to inhabit both cultural spheres, the Jewish and the Arabic, and explores the unique Andalusian encounter of cultures, literatures, religions, and ideas.