END_OF_DOCUMENT_TOKEN_TO_BE_REPLACED

2016. Language Contact and the Development of Modern Hebrew. Leiden: Brill. 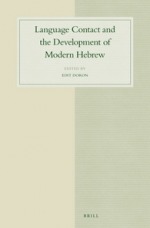 Language Contact and the Development of Modern Hebrew is a first rigorous attempt by scholars of Hebrew to evaluate the syntactic impact of the various languages with which Modern Hebrew was in contact during its formative years. Twenty-four different innovative syntactic constructions of Modern Hebrew are analysed, and shown to originate in previous stages of Hebrew, which, since the third century CE, solely functioned as a scholarly and liturgical language. The syntactic changes in the constructions are traced to the native languages of the first Modern Hebrew learners, and later to further reanalysis by the first generation of native speakers.
The contents of this volume was also published as a special double issue of Journal of Jewish Languages, 3: 1-2 (2015).